AS summer trundles on and the longest day passes, subtle changes can be seen; new flowers come into bloom, certain butterflies appear, bird song changes or stops completely.  Together these observations build up to a set of signs that are predictable, but also delightful.
This week one feature that I have been able to capture is the emergence of small skipper, ringlet, meadow brown and marbled white butterflies.  The excellent book "The Butterflies of Britain and Ireland", which I can't recommend highly enough, gives a helpful insight into which species to expect where and when.  The marbled white adult, for instance, which has a southern distribution, emerges in late June and the disappears in August.  Personally I associate it with the flowering of pyramidal orchids in tall upright dominated brome grassland, where yellow vetches and knapweeds add flecks of yellow and purple to the sward. 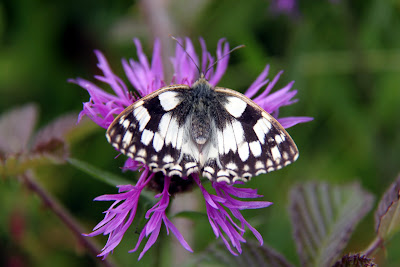 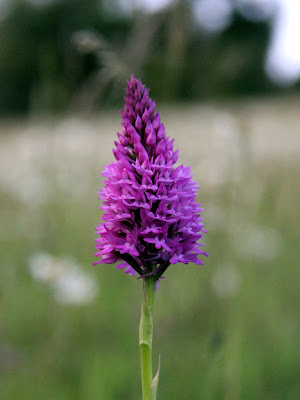 Pyramidal orchid
One slight obsession that I have recently acquired is trying to capture images of flying insects.  This needs to be done during the warmer part of the day, as in the evening butterflies are often stationary on grasses as they settle down for the night.  The evening does, however, enable me to photograph them closely. 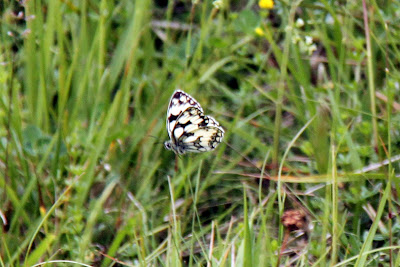 Marbled white in flight
Of course at this time of the year there are masses of different plant species at the height of their power, so to speak.  We visited a local nature reserve where I came across a hidden valley, full of common valerian growing on the edge of a clump of trees.  I normally associate this with woodland glades, but here it had invaded the grassland in amazing profusion.  The small skipper butterflies particularly liked the nectar on offer. 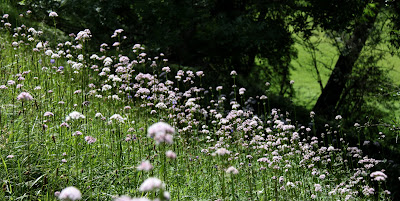 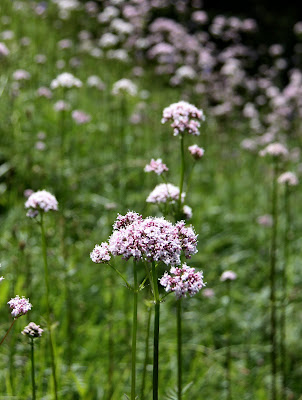 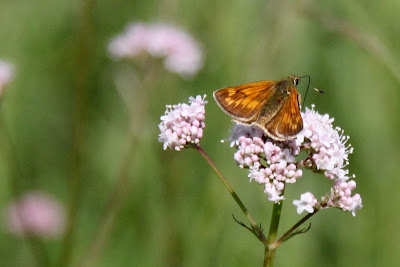 I also found this particularly fine example of a knapweed broom rape.  This is a parasitic plant which grows on knapweeds' roots, as the broomrape has no chlorophyll itself. 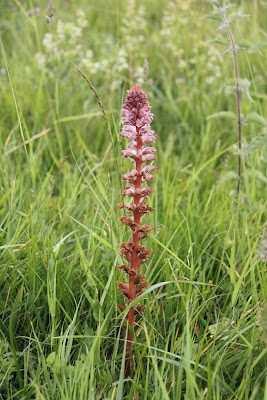 Knapweed broomrape
On an open meadow, where the grassland had been allowed to grow tall, the meadow crane's-bill is now coming into flower.  It was buzzing with bees and the flowering of this plant is strongly associated with mid-summer for me.  When the petals fall from the plant the resulting immature seed pod, and sepals left behind, do look like the head of a crane, approximately.  I suppose were we to name it nowadays we might struggle to find a suitable bird - maybe a heron's bill...doesn't quite work does it? 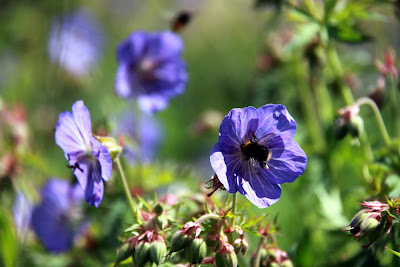 Meadow crane's-bill
On another site this week where I was searching for butterflies, deer, flowers etc. I came across this local speciality in wonderful blooming brilliance - the Bath asparagus.  It has been substituted for the veg of the same name in the past.  It is a large, elegant flower that is usually found along woodland rides and hedgerows.  This one was in tall grassland. 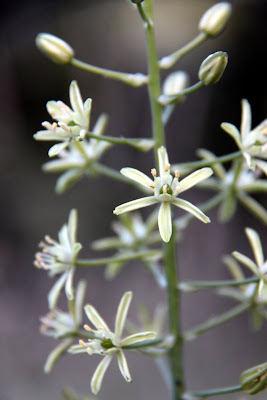 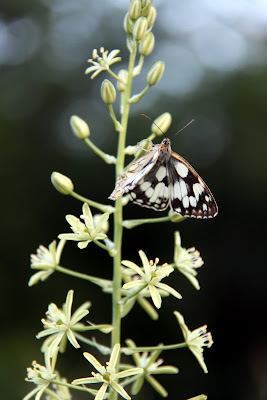 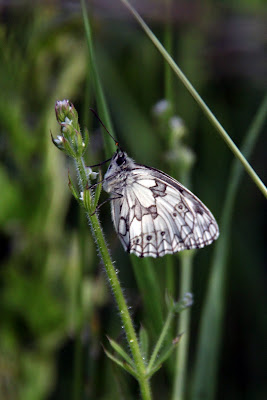 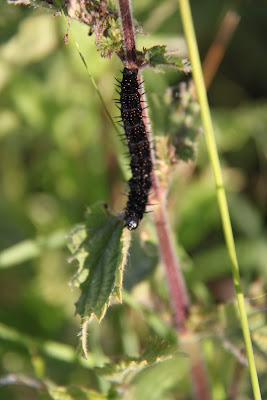 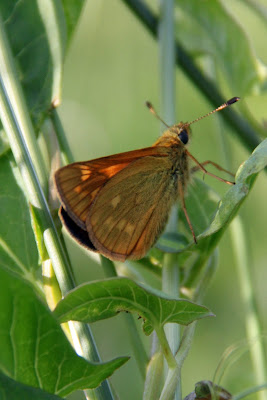 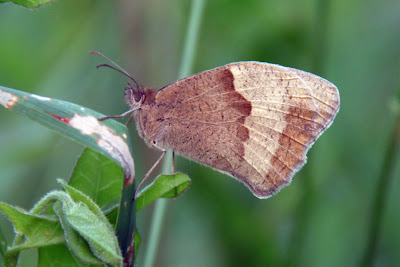 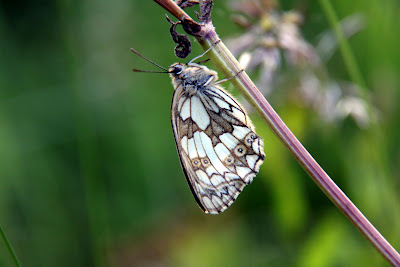 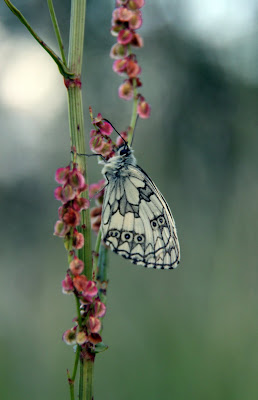 Email ThisBlogThis!Share to TwitterShare to FacebookShare to Pinterest
Labels: butterflies

I took the opportunity last weekend to to make my annual trip to the wonderful Martin Down NNR on the Wiltshire-Hampshire border to seek out butterflies, orchids and maybe nightingales.  This large area of ancient chalk grassland has been carefully managed to promote a wonderful host of interesting and rare species, its a gem of a place and a rightly famous site; ironically it was the arable field next door that really captured my attention!
For some reason the weed-killer had not done its job - I'm not sure if it was the timing or the weather or maybe it was even deliberate, but either way it was a mass of poppies, Shepard's pursue and other weeds in a fading sea of yellow flowered rape. 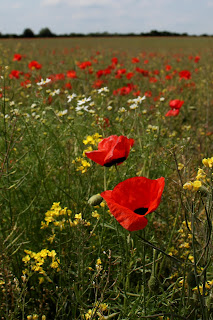 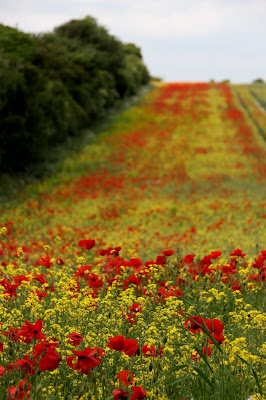 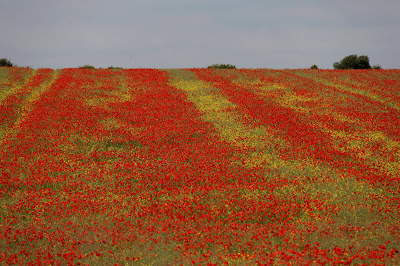 Email ThisBlogThis!Share to TwitterShare to FacebookShare to Pinterest
Labels: poppy

I'VE been meaning to write a quick piece about the amazing profusion of oxeye daisies (Leucanthemum vulgare) along our roadsides, and in some of field margins, this year; the abundance of flowers seems to have surpassed any that I can remember.

As Councils and the Highways Authority now limit the use of weed-killer to manage verges, these, and other "weed"s species, have been able to thrive.  They favour areas where the grass is not too thick, such on newer roads or steep banks.  However it is annoying that some Councils still find it necessary to cut strips of grassland along our roads in the middle of summer, when the flowers are most profuse and the insects that feed our wildlife are most abundant.  Apart from where there is a road safety issue this is unfortunate, to put it mildly.

I took there pictures locally on a small common, rather than on a verge: 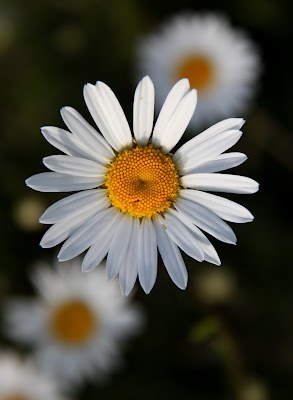 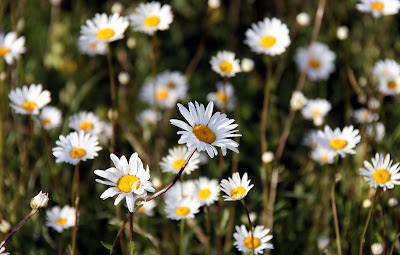 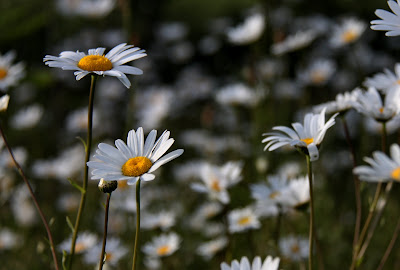 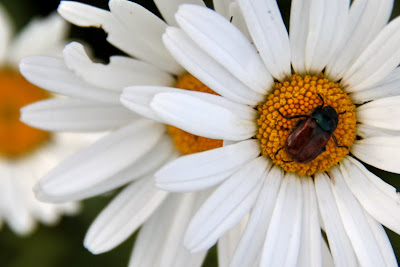