A fantastic day out yesterday on the wonderful Somerset Levels (even if it was very overcast and a bit on the cool side).  The haul was as follows:
The light was poor and the birds were usually too far away for photos, but I recorded them anyway.  The bittern and short-eared owl flew right over head, but I only had my camera ready for the former.

I decided to make a long awaited return visit to Westhay.   This is now one of the quieter reserves in the area, and I hoped that I might just see an otter.  This was not to be, but the species count was exciting anyway.

The day started off with a plopping sound in a rhyne as some frogs hid in the water.  The spawn giving away their location:


The day was characterised by a lot of patient waiting.  Some friendly fellow birders and I waited for the owl to reappear - it didn't. 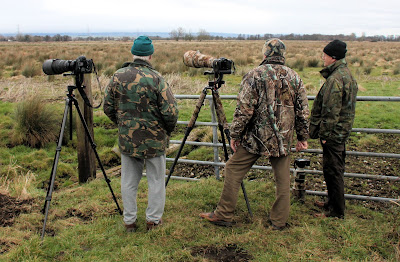 THIS extended weekend saw a visit to the Cotswolds, then on to my ancestral home to see the folks and celebrate mutual birthdays.  This provided an opportunity to make a return visit to the small, but perfectly formed, Lemsford Springs nature reserve which is run by the Herts & Mid'sex Wildife Trust.

The reserve is the site of an old Watercress bed and the water rarely, if ever, freezes as it is spring fed.  This makes the site very rich in shrimps, which in turn feeds the locals (birds).  The highlights were snipe, teal, green sandpiper, little egrets, grey wagtail and lots of small woodland birds.  Unfortunately we just missed out on the Jack Snipe and did not see a water-rail or kingfisher this time.

I had my camera with me as usual (at least on our second visit of the weekend), but was struggling to get good images of the distant birds.  Another birder sitting nearby very generously let me try out his lens on my camera...and what a difference it made.  However  I suspect the lens and extenders probably were more expensive than my car.  The green sandpiper images were taken with his lens: 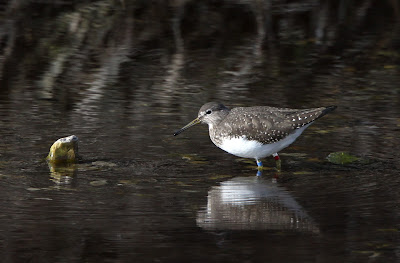 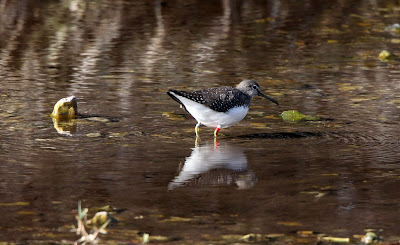 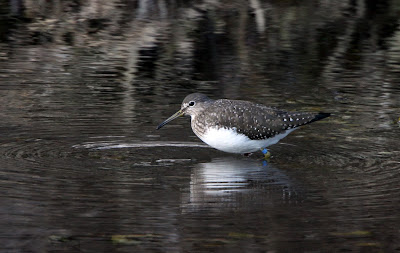 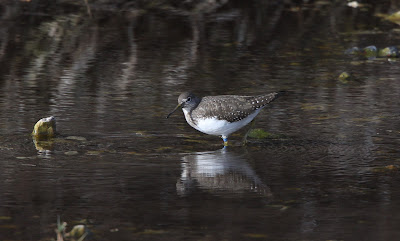 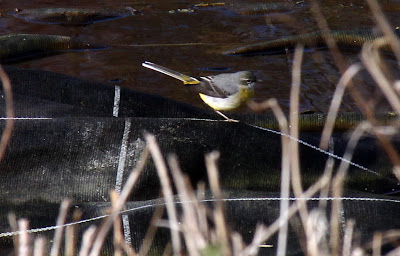 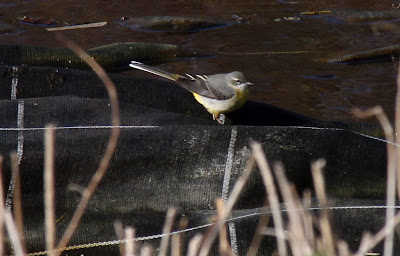 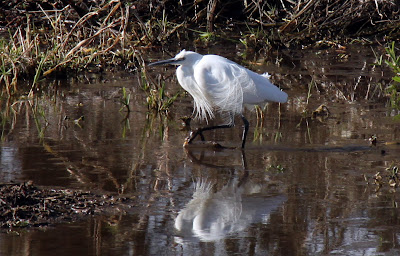 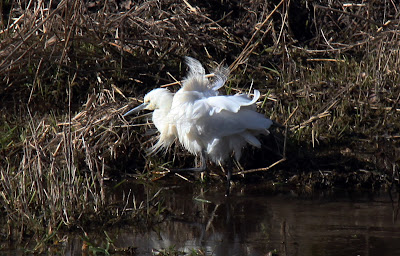 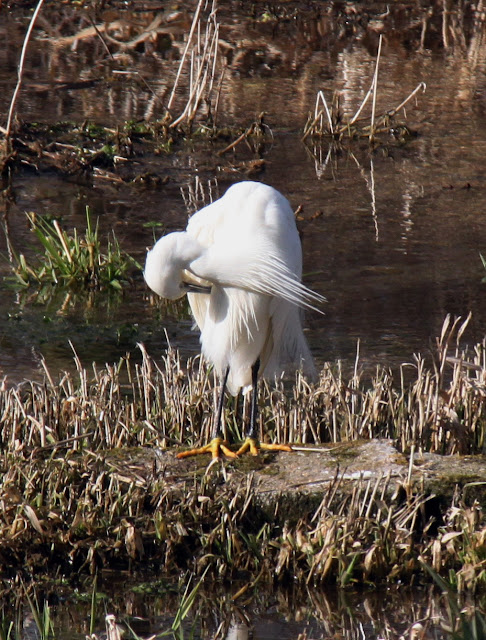 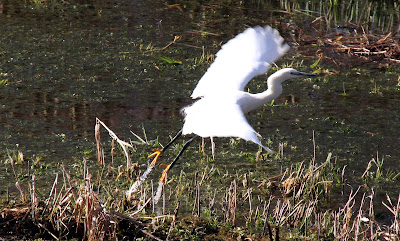 WE popped into Lacock on Sunday to potter around and admire the village.  Now that we are National Trust members, we were happy to go into the Abbey, its grounds and the cloisters (those of Harry Potter fame), as we did not have to pay the rather high entrance fee.

The snowdrops were out in profusion and for once really had snow around them.  The golden yellow flowers of the aconites were a rare splash of colour for this time of year.  I always consider these two flowers to be the heralds of spring - even if that feels rather optimistic just now... 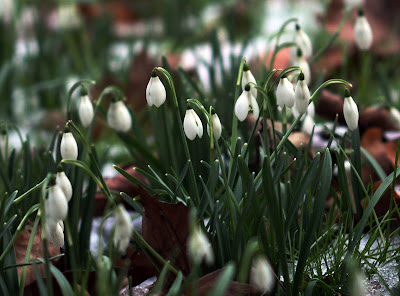 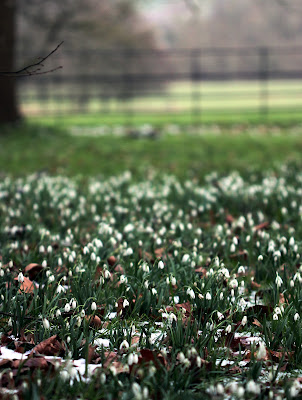 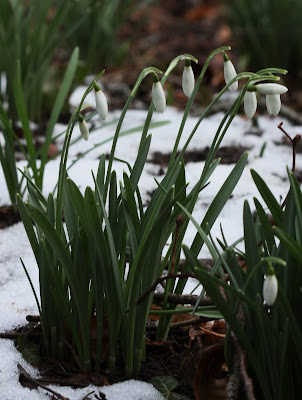 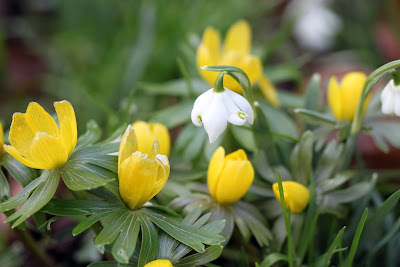 On the return trip back home we were treated by this breath taking sunset. 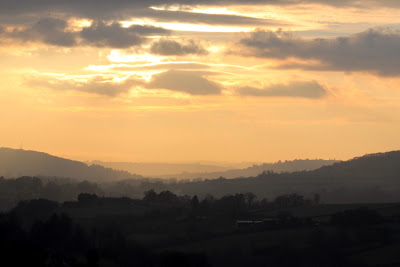 SLIMBRIDGE WWT Festival of Birds last weekend offered up the opportunity to hear about, and see, bird ringing.  This was a rather undignified experience for this female teal (below), but interesting for us never the less.

There is a small ringing hut, with a roaring open fire and all the tools of the experts laid out.  Taking measurements and recording the bird is a vital part of this exercise.  The rings are retrieved when the birds are recaptured, or more often shot.  By plotting the birds' distribution and understanding their movements, a small window into their ecology is opened up, which helps in the conservation effort.


Here are some other images from the day: 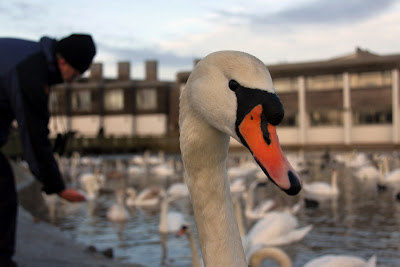 THIS weekend we trooped off to Slimbridge WWT to enjoy their Festival of Birds.  There were a number of events and stalls (selling some very enticing books and art), but of course we were there to see the wild and captive birds.

There is quite a blurred line between the wild and captive birds, and it is often hard to know which is which. This is especially the case as the wheat that we fed them (stashed in our pockets in brown paper bags) enticed the ducks, geese, swans, gulls, wood pigeons etc. to approach us - many have become rather tame. There are a large number of mute swans, as well as the winter migrating whooper and bewick swans, at this site.  The mutes come to hand quite readily.  It is only when you really look at them that you realise just quite amazing they are.

Here are few of my snatched images from the end of the day: 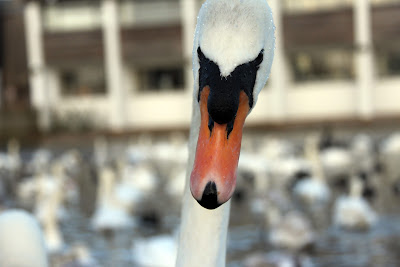 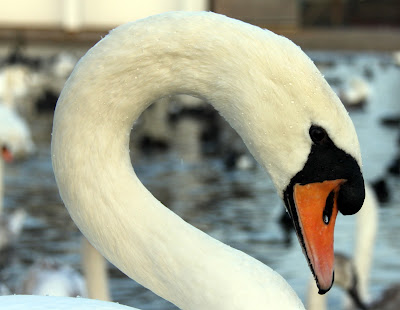 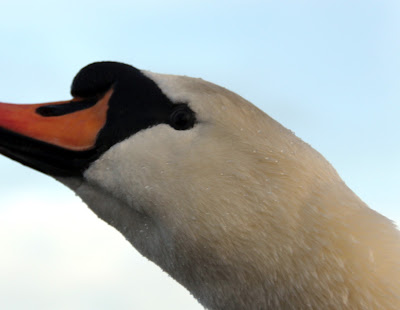 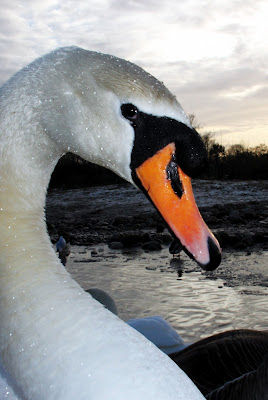 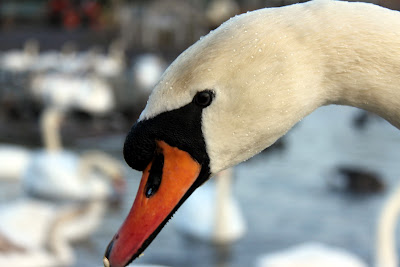 Email ThisBlogThis!Share to TwitterShare to FacebookShare to Pinterest
Labels: Slimbridge

YESTERDAY I had a surprising and rather wonderful wildlife experience...at work!

At the foot of a stone stairwell, sitting quietly in the corner, was a perfect peacock butterfly.

Peacocks overwinter as adults in cool places where there is shelter, such as garden sheds and outhouses.  This one had chosen County Hall.  However it was very vulnerable where it was so I took it out the way to a safer place.

As I carried it to its new home it flashed its wings at me.  As this species has great big eye spots, this might be quite effective as a predator deterrent, but what really surprised me was that as it opened and closed its wings it made a very audible rasping noise.  This was not a vocalisation, but was made by the physical act of the wings moving, apparently the fore and hind wings rubbing together to make the noise.  It had quite a startling effect, which is surprising for such a small beast.  This was not just my imagination - as Jeremy Thomas confirms this in his excellent book.

As the insect was so perfect I wonder whether it emerged late in this species normal cycle.

This one below was taken last summer, as (unsurprisingly) I did not have my DSLR with me at work... 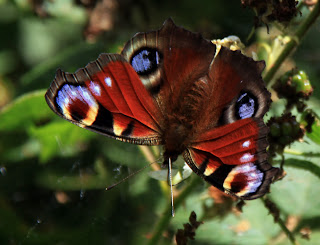